There are three main types of races:

Racing takes place on a natural grass surface (turf) or on a synthetic surface (all-weather). Racing in Europe is generally on turf, while in the United States and Canada, the more important races are on dirt or all-weather. Indeed, nearly all North American races are flat races, as steeplechase racing is very infrequent and largely confined to short, specialized race meets. 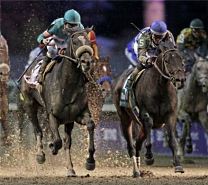 The origins of modern horse racing lie in the 12th century, when English knights returned from the Crusades with swift Arab horses. Over the next 400 years, an increasing number of Arab stallions were imported and bred to English mares to produce racing horses that combined speed and endurance. Matching the fastest of these animals in two-horse races for a private wager became a popular diversion of the nobility.

Horse racing began to become a professional sport during the reign (1702-14) of Queen Anne, when match racing gave way to horse races involving several horses on which the spectators wagered. Horse racing racecourses sprang up all over England, offering increasingly large purses to attract the best race horses. These purses in turn made horse breeding and owning horses for racing profitable. With the rapid expansion of the sport came the need for a central governing authority. In 1750, racing's elite met at Newmarket to form the Jockey Club, which to this day exercises complete control over English racing.

The Jockey Club wrote complete rules of racing and sanctioned racecourses to conduct meetings under those rules. Standards defining the quality of horse racing soon led to the designation of certain races as the ultimate tests of excellence. Since 1814, five horse races for three-year-old horses have been designated as "classics." Three races, open to male horses (colts) and female horses (fillies), make up the English Triple Crown: the 2,000 Guineas, the Epsom Derby and the St. Leger Stakes. Two horse races, open to fillies only, are the 1,000 Guineas and the Epsom Oaks.

The Jockey Club also took steps to regulate race horse breeding. James Weatherby, whose family served as accountants to the members of the Jockey Club, was assigned the task of tracing the pedigree, or complete family history, of every horse racing in England. In 1791 the results of his research were published as the Introduction to the General Stud Book. From 1793 to the present, members of the Weatherby family have meticulously recorded the pedigree of every foal born to those racehorses in subsequent volumes of the General Stud Book. By the early 1800s the only race horses that could be called "Thoroughbreds" and allowed to race were those descended from horses listed in the General Stud Book. Thoroughbreds are so inbred that the pedigree of every single animal can be traced back father-to-father to one of three stallions, called the "foundation sires."

To learn more about the types of Thoroughbred Horse Races and Thoroughbred Classifications visit: Thorough Horse Racing Types and Classes

The first records of Quarter Horse races dated back to 1674 in Henrico County, Virginia. Each race consisted of only two horses and they raced down the village streets and lanes. The Quarter Horse received its name due to the length of the race. The races were indeed "a quarter" of a mile, or 400 meters. The breed of horse was developed so they could get off to a quick start, and win the race. 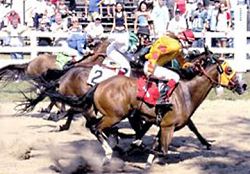 The ancestors of the Quarter Horse were prevalent in America in the early 17th century. These horses were a blend of Colonial Spanish horses crossed English horses that were brought over in the 1700s. The native horse and the English horse were bred together, resulting in a compact muscular horse. At this time, they were mainly used for chores such as plowing and cattle work. The American Quarter Horse was not recognized as an official breed until the formation of the American Quarter Horse Association in 1940.

In order to be successful in racing, Quarter Horses need to be able to propel themselves forward at extremely fast sprinter speed. The Quarter Horse has much larger hind limb muscles than the Arabian, which make it much less suitable for endurance racing. They also have more Type IIb fibers, which allow the Quarter Horse to accelerate rapidly.

When Quarter Horse racing began, it was very expensive to lay a full mile of track so it was agreed that a straight track of four hundred meters, or one quarter of a mile would be laid instead. It became the standard racing distance for Quarter Horses and inspired their name. With the exception of the longer, 870-yard (800 m) distance contests, Quarter Horse races are run flat out, with the horses running at top speed for the duration. There is less jockeying for position, as turns are rare, and many races end with several contestants grouped together at the wire. The track surface is similar to that of Thoroughbred racing and usually consists of dirt.

Harness racing is a form of horse racing in which the horses race at a specific gait (a trot or a pace). They usually pull a two-wheeled cart called a sulky, although racing under saddle (trot monté in French) is also conducted in Europe.

In North America harness races are restricted to Standardbred horses, although European racehorses often have French or Russian lineages (such as the Orlov trotter). Light cold-blooded horses (such as Dole Gudbrandsdal horses, North Swedish Horses and Finnhorses) race separately in Scandinavia.

Races can be conducted in two differing gaits - trotting and pacing. The difference is that a trotter moves its legs forward in diagonal pairs (right front and left hind, then left front and right hind striking the ground simultaneously), whereas a pacer moves its legs laterally (right front and right hind together, then left front and left hind). In continental Europe, races are conducted exclusively among trotters, whereas in Australia, Canada, New Zealand, the United Kingdom and the United States races are also held for pacers. 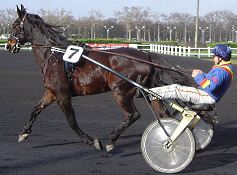 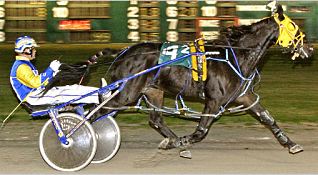 Pacing horses are faster and (most important to the bettor) less likely to break stride (a horse which starts to gallop must be slowed down and taken to the outside until it resumes trotting or pacing). One of the reasons pacers are less likely to break stride is that they often wear hopples or hobbles (straps connecting the legs on each of the horse's sides). The belief that hopples are used to create this gait is a common misunderstanding. The pace is a natural gait for many horses, and hopples are an aid in supporting the gait at top speed; trotting hopples (which employ a different design, due to the difference in the gait) are becoming increasingly popular for the same reason.

Most harness races start from behind a motorized starting gate. The horses line up behind a slow-moving, hinged gate mounted on a motor vehicle, which then leads them to the starting line. At the line, the wings of the gate are folded up and the vehicle accelerates away from the horses. Another kind of start is a standing start, where there are tapes or imaginary lines across the track behind which the horses either stand stationary or trot in circles in pairs in a specific pattern to hit the starting line as a group. This enables handicaps to be placed on horses (according to class) with several tapes, usually with 10 or 20 meters between tapes. Many European - and some Australian and New Zealand - races use a standing start.

The sulky (informally known as a "bike") is a light, two-wheeled cart equipped with bicycle wheels. The driver (not a "jockey", as in thoroughbred racing) carries a light whip chiefly used to signal the horse by tapping and to make noise by striking the sulky shaft. There are strict rules as to how and how much the whip may be used; in some jurisdictions (like Norway), whips are forbidden. For exercising or training, the drivers use what is known as a "jog cart," which is a sulky that is heavier and bulkier than a racing unit.

The steeplechase is a form of horse racing (primarily conducted in the United Kingdom, Canada, United States, Australia, France, and Ireland) and derives its name from early races in which orientation of the course was by reference to a church steeple, jumping fences and ditches and generally traversing the many intervening obstacles in the countryside. In Great Britain and Ireland the official term now used for the sport is National Hunt racing.

It is a term now used to refer to a distance horse race with diverse fence and ditch obstacles; the most famous of these is the Grand National run annually at Aintree Racecourse, in Liverpool, since its inception in 1836 (the official race was held three years later).

The steeplechase originated in Ireland in the 18th century as an analogue to cross-country thoroughbred horse races which went from church steeple to church steeple, hence "steeplechase." The first steeplechase is said to have been the result of a wager in 1752 between Cornelius O'Callaghan and Edmund Blake, racing four miles (6 km) cross-country from Buttevant Church to St. Leger Church in Doneraile, in Cork, Ireland. An account of the race was believed to have been in the library of the O'Brien's of Dromoland Castle. Most of the earlier steeplechases were contested cross-country rather than on a track, and resembled English cross country as it exists today. The first recorded steeplechase over a prepared track with fences was run at Bedford in 1810, although a race had been run at Newmarket in 1794 over a mile with five-foot bars every quarter mile. The first recognised English National Steeplechase took place on Monday 8 March 1830. The 4-mile (6.4 km) race, organised by Thomas Coleman of St Albans, was run from Bury Orchard, Harlington in Bedfordshire to the Obelisk in Wrest Park, Bedfordshire. The winner was Captain Macdowall on "The Wonder", owned by Lord Ranelagh, who won in a time of 16 mins 25 seconds. Reports of the event appeared in the May and July editions of the Sporting Magazine in 1830.